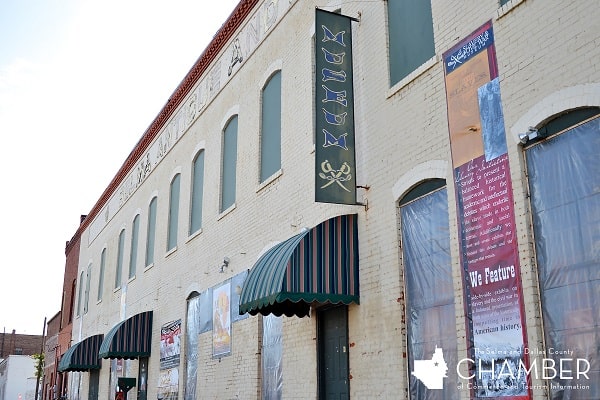 1410 Water Ave.
(334) 526-4000
www.aaecwm.org
This sister museum to the National Voting Rights Museum houses exhibits that depict historical, topical, and provocative impacts and occurrences during slavery in America.  Admission charged.  Please call ahead to schedule a tour. 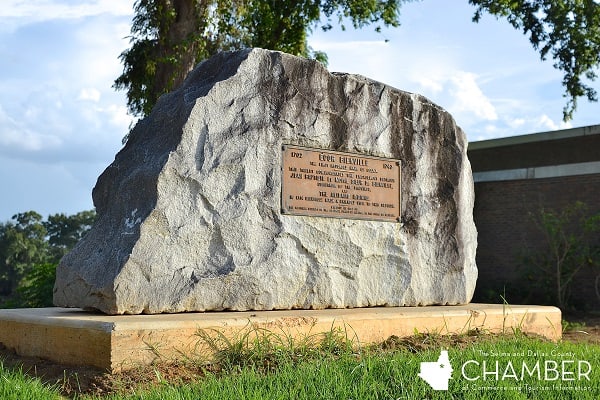 Lauderdale St.. and Water Ave.
The first time Selma appeared on a map in the early 1700s, it was known as Écor Bienville and named after John Baptiste Le Moyne Sieur De Bienville, a French explorer and colonial Governor of Louisiana.  The  monument, erected in 1932 by the National Society of Colonial Dames of America, was placed to commemorate the engagement between Bienville and the Alibamo Indians on the bluff along the Alabama River. 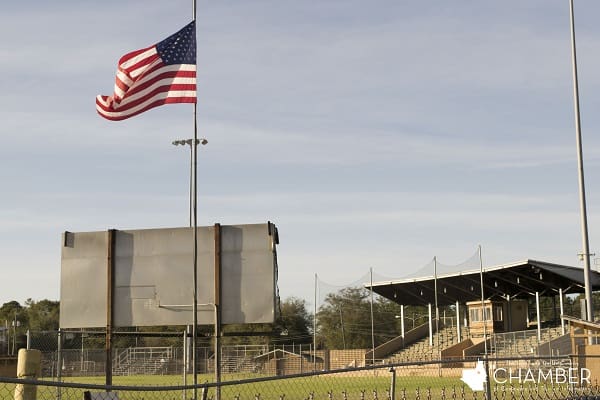 108 West Dallas Avenue
This baseball stadium has been home to both collegiate and professional baseball teams, although it is currently used for high school and American legion baseball. The park features a playground, walking trail, and is also home to the Farmer’s Market. 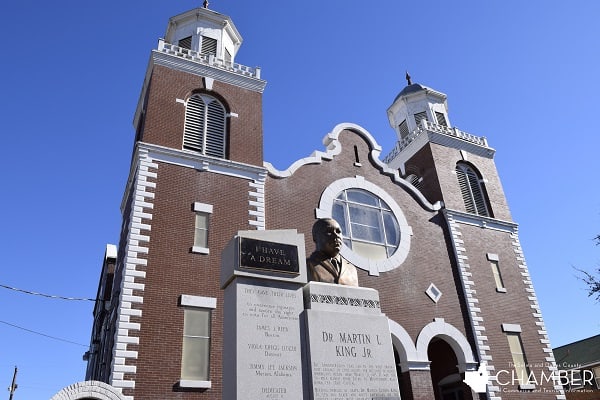 410 Martin Luther King Jr. St.
(334) 874-7897
Visit the headquarters for the 1965 voting rights marches.  A bust of Dr. King in front of the church commemorates his involvement in the movement. Admission charged. Please call ahead to schedule tour.

1 Marina Dr.
Anglers from across the Southeast and the U.S. visit the Selma Marina to participate in fishing tournaments. Tourists and residents enjoy boating, fishing, and visiting The Sand Bar, a popular restaurant at the Marina. 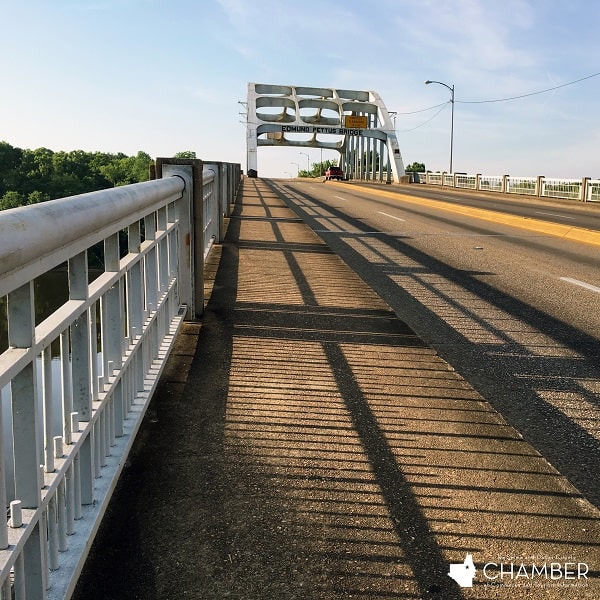 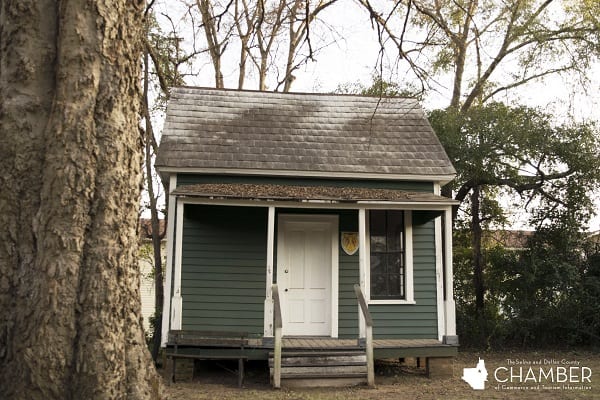 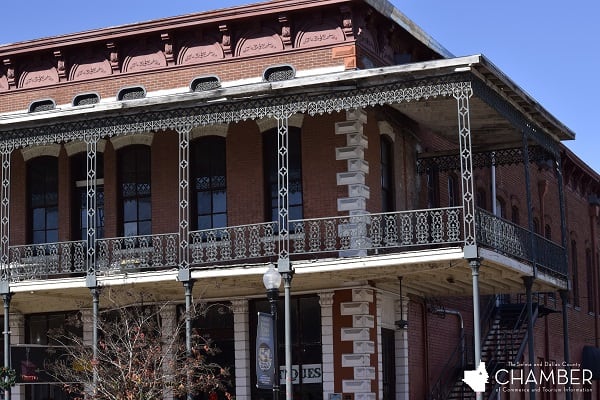 View the world-famous Edmund Pettus Bridge and Songs of Selma Park as you stroll through one of Selma’s most historic areas.  Visit the Bridge Tender’s House and Riverfront Park as you explore our city’s rich history. 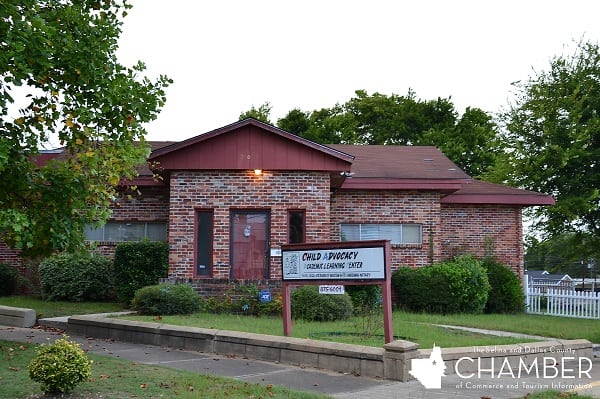 701 Lauderdale St.
(334) 875-6001
This museum provides an educational experience for children with disabilities and is a project of the Selma Disabilities Advocacy Program, a non-profit organization. 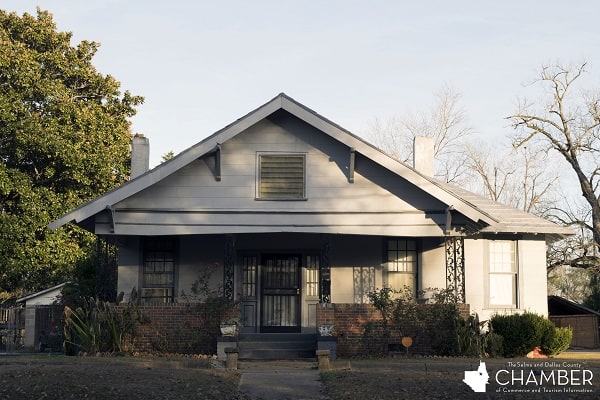 1416 Lapsley Ave.
(404) 792-0666
www.jacksonfoundationandmuseum.com
The Jackson Home was the official residence where world leaders resided while planning the Selma to Montgomery March in late 1964 until April of 1965. The home was built in 1912 by Dr. Richard Byron Hudson, a noted educator in Selma and is the only known residence in the country which has housed three African American dentists and their families from 1912-2013. Tours are conducted throughout the home which contains original artifacts related to the American Voting Rights Movement. 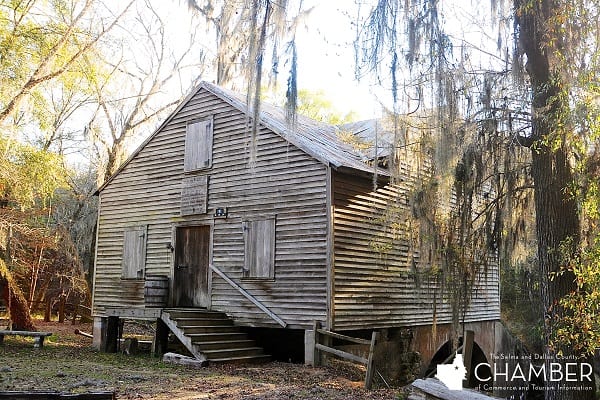 188 County Rd. 236
(334) 412-0722
www.kenansmill.com
Built in the mid-1800s producing mill, grits, and corn for over 100 years and also includes a 19th century brick charcoal kiln.  It was continuously owned by the Kenan family until Elizabeth Kenan Buchanan donated it to the Selma-Dallas County Historic Preservation Society in 1997.  Restoration is ongoing with the mill fully operational and open during special events. 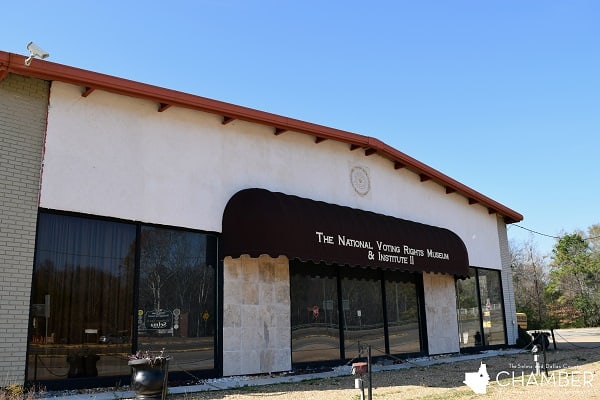 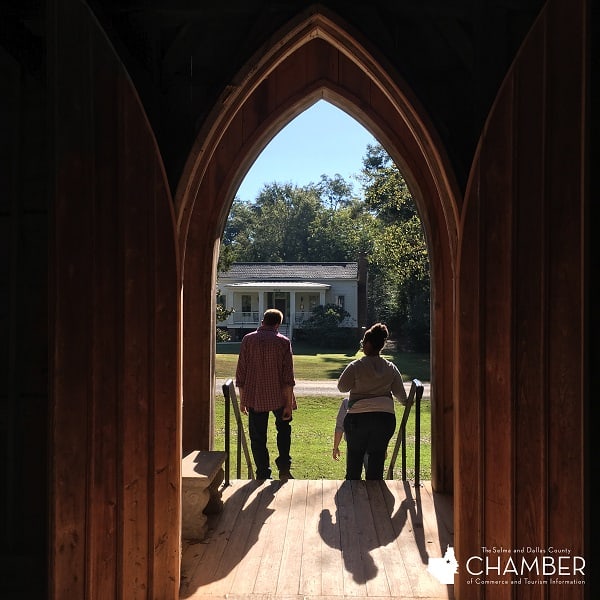 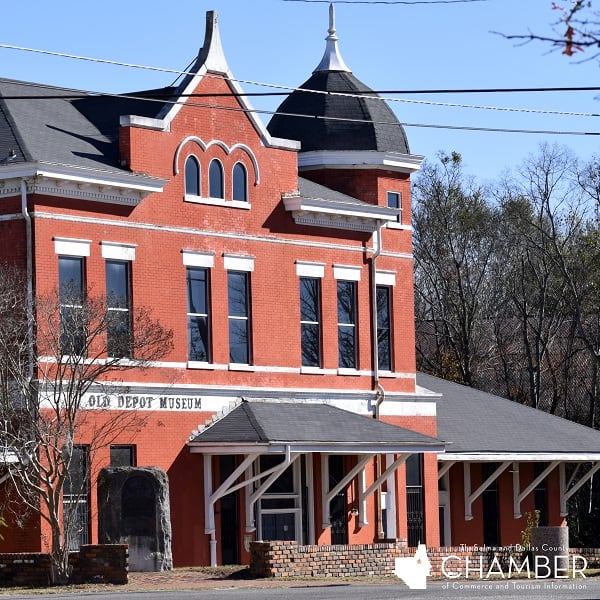 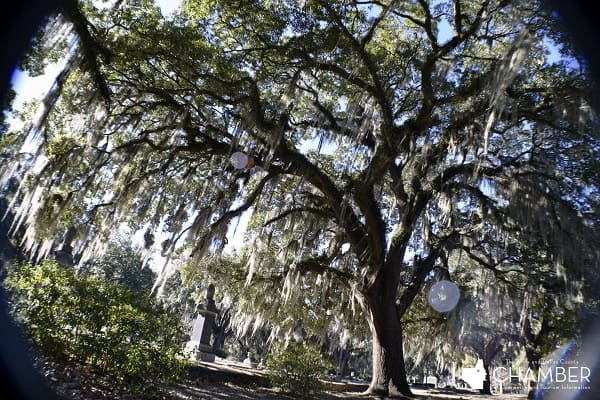 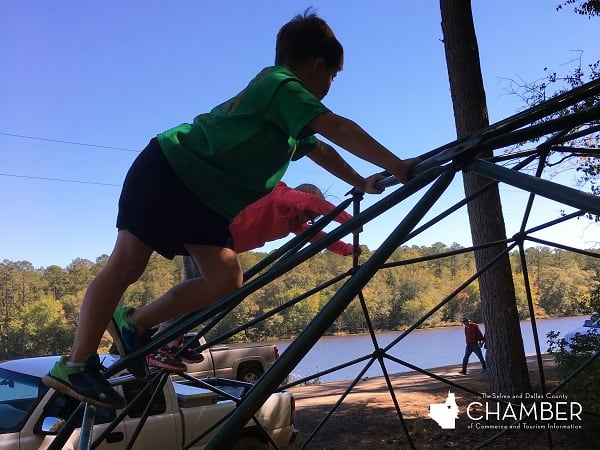 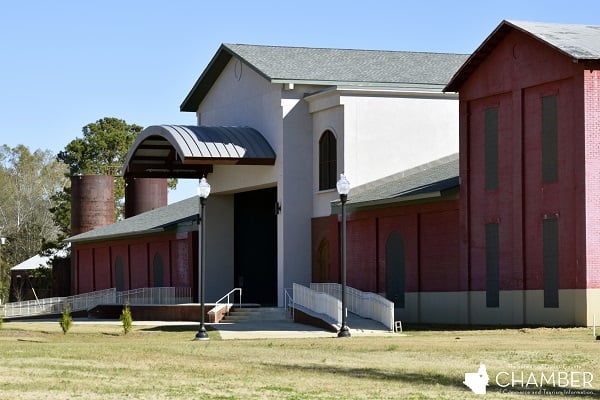 Water Avenue and Green St.
Twelve-acre park with concrete path, a timber bridge, and two overlooks to the Alabama River representing the first phase of the City’s Riverfront Development plan. 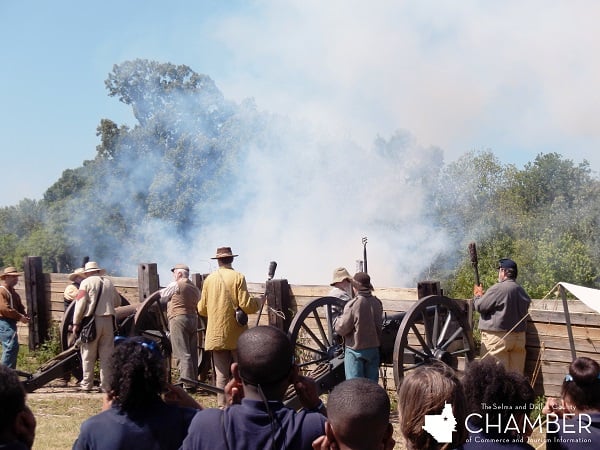 1 Satterfield St.
Riverside Park is most known as the home of the annual Battle of Selma Re-enactment in which re-enactors portray the sights and sounds of 1865 during the Battle of Selma.  The park also features a covered bridge leading to Bloch Park. 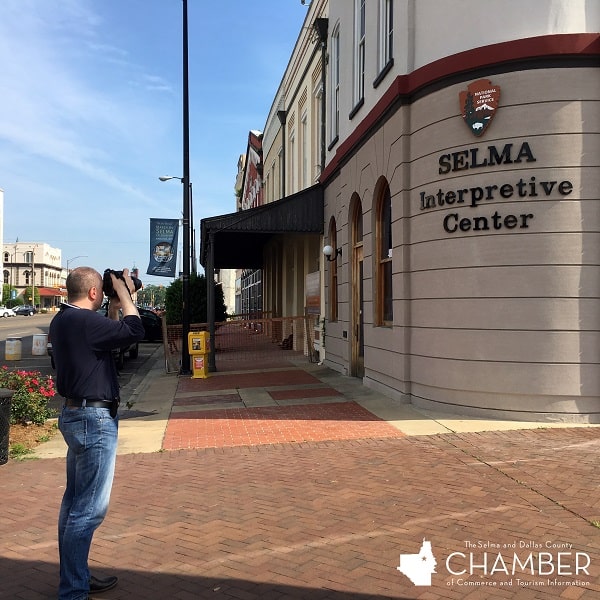 2 Broad St.
(334) 872-0509
www.nps.gov/semo
The Selma Interpretive Center serves as a welcome center for the Selma to Montgomery National Historic Trail and is located at the foot of the Edmund Pettus Bridge.  Visitors can explore exhibits and a bookstore dedicated to telling the story of the movement. 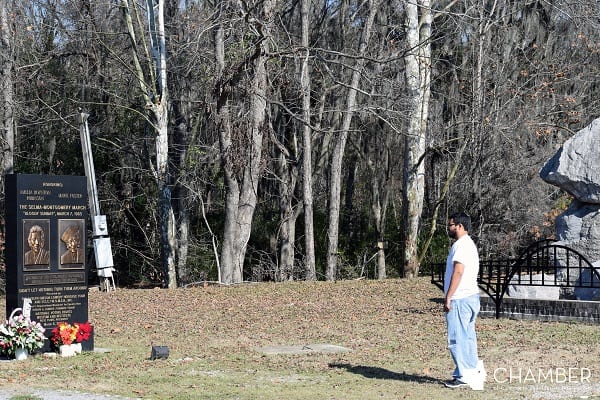 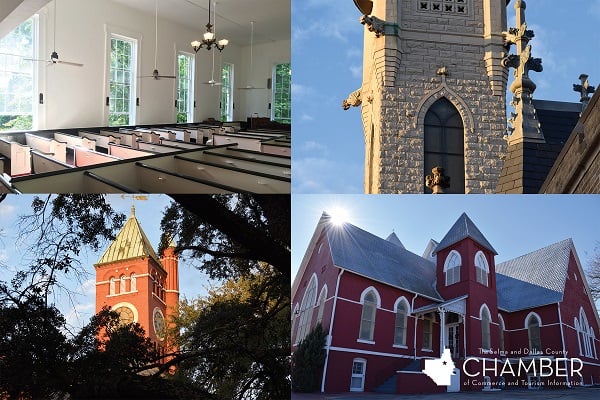 Religion was an essential thread of the fabric of life in early Selma.  A number of churches exist in Selma’s community with both architectural and historical significance.  Historic Churches of Selma booklets are available at the Centre for Commerce. 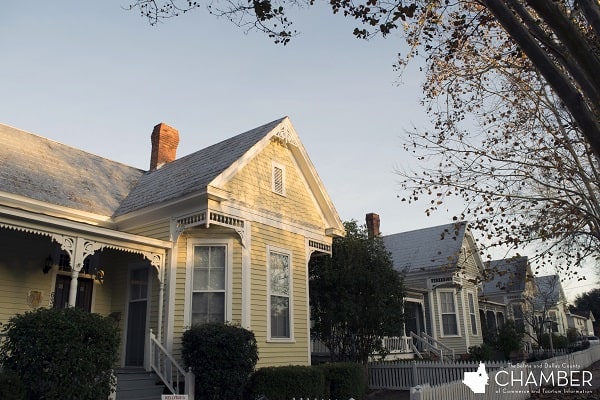 View over 1,200 historic structures dating back to the 1820s in Alabama’s largest historic district.  Architecture and History Tour guides are available at the Centre for Commerce. 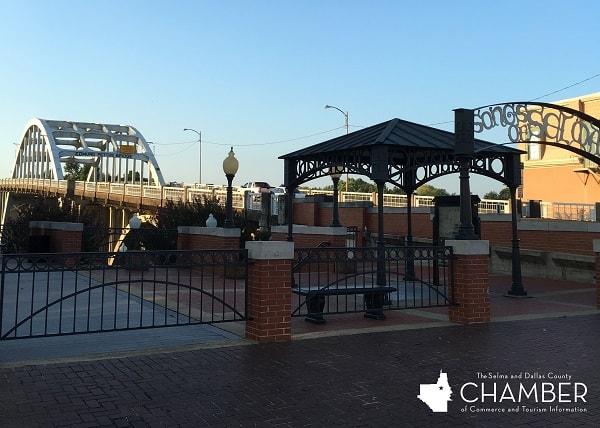 Broad St. and Water Ave.
Songs of Selma Park was created by the City of Selma from a vacant lot where the Baker building once stood.  The Baker building housed a general merchandise store, a hardware store, and at the time of it’s burning, a fine restaurant.  The park’s name came from an Ossian poem “Songs of Selma,” from which Selma was named. 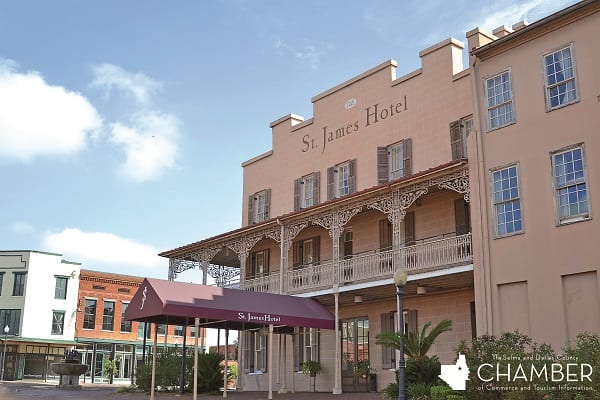 1200 Water Ave.
(334) 872-3234
www.historicstjameshotel.com
Built in 1837 atop the banks of the Alabama River, the St. James Hotel has witnessed much of the dramatic history in this picturesque Southern city and is now one of the only surviving riverfront antebellum hotels in the Southeast.  It was a home-away-from-home for visiting plantation owners, businessmen, and other travelers. Notorious outlaws Frank and Jesse James spent time here in the 1880s and are rumored to haunt the hotel. 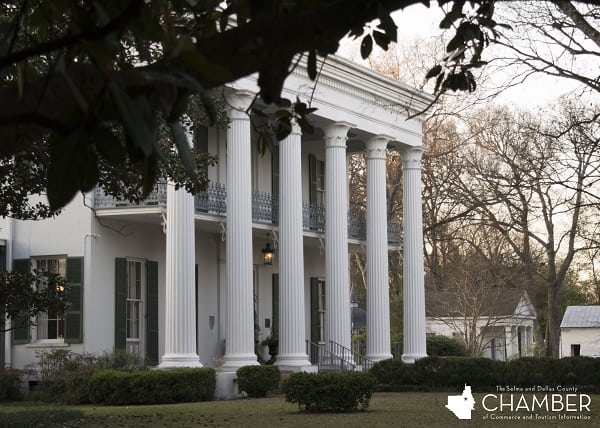 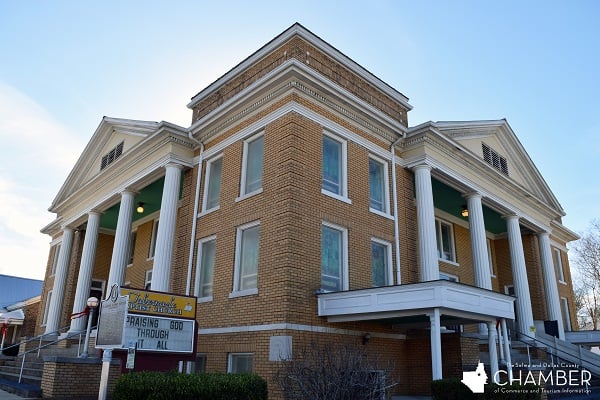 1431 Broad St.
Civil Rights activists from the Southern Christian Leadership Conference held one of the first mass meetings at Tabernacle Baptist Church.  This enabled the church to play a significant role in the struggle for racial  equality in Selma and it is now a National Historic Landmark. 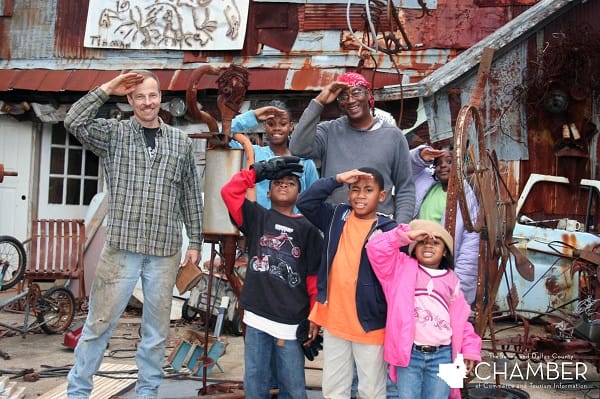 9 Lauderdale St.
(334) 327-1373
Known for his knack at recycling metal and other materials into 3-D works, Charlie Lucas turned a hobby into a profession following a back injury in 1984.  As he recovered, Lucas prayed that God would give him a talent he could use to support his family.  Soon, his life was “recycled” into “junk-man genius.” Now, almost three decades later, The Tin Man’s art has been seen from Selma to Montgomery, from New York to France, and numerous other places between.  He has lectured at Yale and painted in Paris.  His story and works also appear in more than 40 books. Please call ahead to schedule a tour. 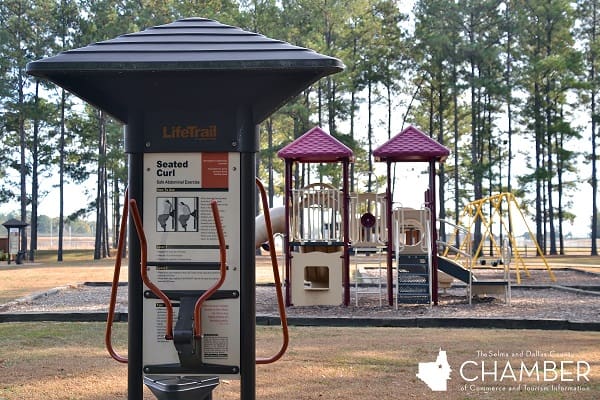 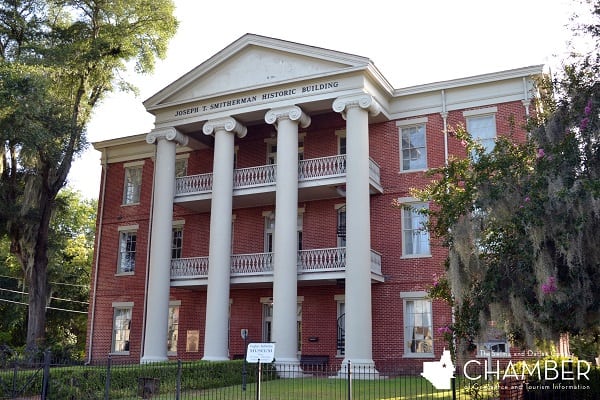 109 Union St.
(334) 874-2174
This Greek revival building was built in 1847 and has served as a hospital, courthouse, military school, and now as a museum.  View an extensive collection of Civil War memorabilia, artifact exhibits, Victorian antiques, nationally acclaimed art from local artists, and much more.  Admission charged. 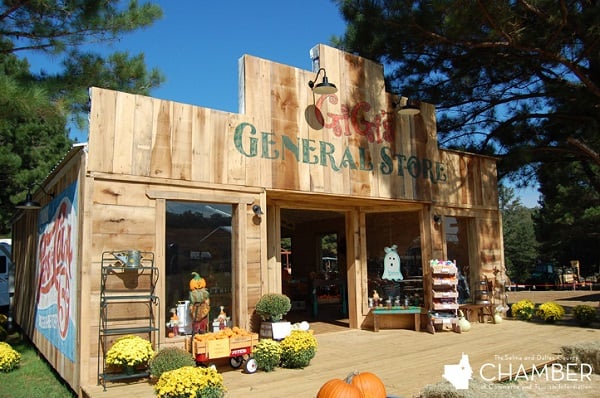